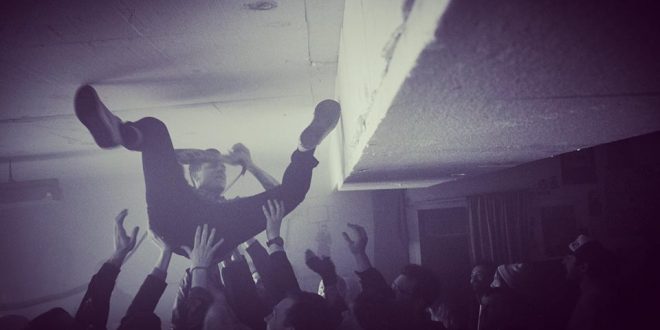 WOES: Touring is our personal reward for playing music

WOES (DK) are coming for the first time in Sofia for a gig with Hexis, ZilpZalp and King of Sorrow. We managed to catch them between two shows to have them answer a few questions in an attempt to get to know them a little bit better before the show!

WOES is a Copenhagen based hardcore band that was formed around 3 years ago. What sets us apart from other bands in the scene is that we like to incorporate a lot of electronic elements into the soundscape. We also run a completely manually controlled light show while performing. We are very focused on delivering emotional performances where the visual aspect is as important as the music itself. Since the formation of the band, we’ve been touring in pretty much every corner of Europe. We feel very privileged to be able to experience so many different cultures and meet so many dedicated people on the road!

Your sound is primarily raw and abrasive but one can catch influences from a plethora of genres like post-punk, electronic music, even maybe indie. How did you reach your sound?

Our soundscape is quite complex as we draw inspiration from a wide array of genres. Back in the days, we were very inspired by the Scandinavian blackened hardcore sound. As time passed we started experimenting and incorporating genrés which are usually not heard together. We had an overall thematic when we started writing for TCPWM which allowed us to take inspirations from a lot of different sources without compromising on the music.

What about your lyrics, what are you singing about?

The songs are about inner conflict and lost love explained through metaphors.

Your first album appeared earlier this year, how did that go?

We have done 4 tours on this record so far. Since touring is our personal reward for playing music we feel pretty satisfied with the outcome. With that being said the competition is quite tough in Denmark. We didn’t get too much attention back home. But who cares when you can tour and have fun all over Europe?

What’s your live set like, do you focus on the material from “The Coldest Place Is Within Myself” or you will share some unreleased stuff?

We exclusively play songs from our back catalog. Since this is the tour cycle of TCPIWM we mainly play songs from that album. We are writing for our next release and as usual, we’re being way too experimental with what we’ve written so far. We don’t plan on sharing the new songs with you until it makes sense in the greater perspective.

For most bands European tour means Germany, Netherlands, Belgium, why bother reaching obscure and I’d say fucked up locations like the Balkans?

We try to cover and experience as many countries and cultures as possible. We love playing in the Balkan countries – the people here are super nice and welcoming.

What are your causes besides music?

Nicholas, Simon, and Sebastian work with children – in kindergarten and after-school care. Christian work at a bar in Copenhagen.

Give the promoters a hint, name your top 3 vegan meals?

What’s up in Copenhagen, share with us your favorite DIY spots and most interesting bands?

The 3 best DIY spots we love to hang out in are Ungdomshuset (The Youthhouse), Bumzen and Kraftwerket. The all host a lot of punk, hardcore and metal shows. Hexis, Lifesick, and Solbrud are amongst our favourite Danish bands in the Danish DIY scene. We have been touring a lot with Hexis, so they have automatically become good friends and a huge inspiration for us. Lifesick is a hard-hitting band whom we did our first tour with. Solbrud is amazing atmospheric black metal, their live shows and albums are insane. And they are very nice and down to earth guys.

What have you been reading lately, any cool books for reading in the van or maybe some recommended podcasts?

We don’t really read any books. We just make fun of each other and play BrawlStars on our phones.