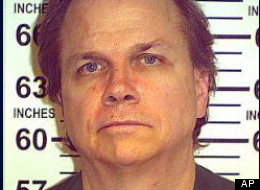 This May 15, 2012 photo provided by the New York State Department of Corrections shows Mark David Chapman at the Wende Correctional Facility in Alden, N.Y. Chapman, who killed John Lennon in 1980, was denied release from prison in his seventh appearance before a parole board, New York corrections officials said Thursday, Aug. 23, 2012. Chapman shot Lennon in December 1980 outside the Manhattan apartment building where the former Beatle lived. He was sentenced in 1981 to 20 years to life in prison after pleading guilty to second-degree murder. (AP Photo/New York State Department of Corrections)